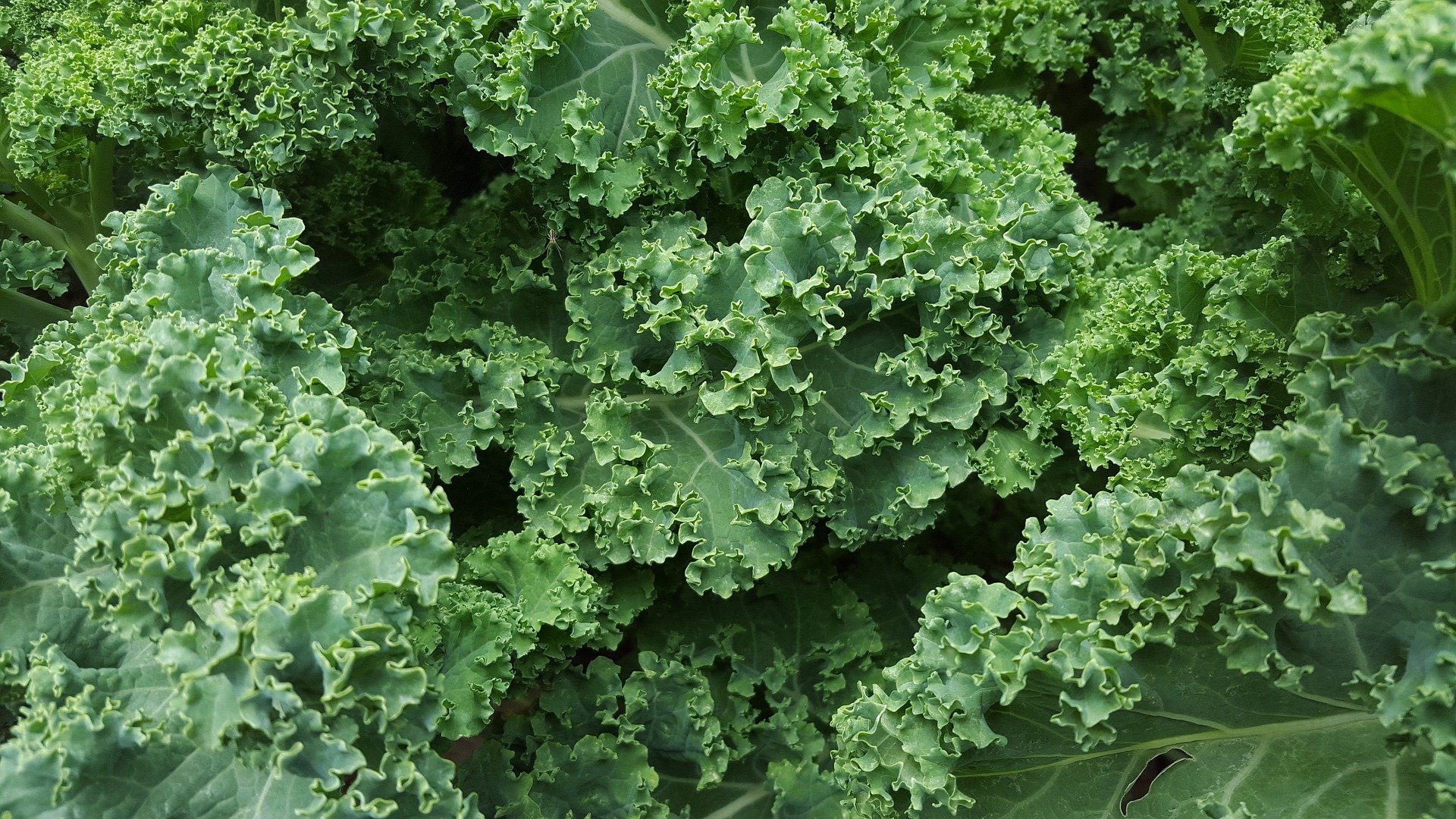 Of all the super healthy greens, kale is king.

It is definitely one of the healthiest and most nutritious plant foods in existence.

Kale is loaded with all sorts of beneficial compounds, some of which have powerful medicinal properties.

Here are 10 health benefits of kale that are supported by science.

1. Kale Is Among The Most Nutrient-Dense Foods on The Planet

Kale is a popular vegetable and a member of the cabbage family.

It is a cruciferous vegetable like cabbage, broccoli, cauliflower, collard greens and Brussels sprouts.

There are many different types of kale. The leaves can be green or purple, and have either a smooth or curly shape.

The most common type of kale is called curly kale or Scots kale, which has green and curly leaves and a hard, fibrous stem.

This is coming with a total of 33 calories, 6 grams of carbs (2 of which are fiber) and 3 grams of protein.

Kale contains very little fat, but a large portion of the fat in it is an omega-3 fatty acid called alpha linolenic-acid.

Given its incredibly low calorie content, kale is among the most nutrient-dense foods in existence. Eating more kale is a great way to dramatically increase the total nutrient content of your diet.

SUMMARYKale is very high in nutrients and very low in calories, making it one of the most nutrient-dense foods on the planet.

2. Kale Is Loaded With Powerful Antioxidants Like Quercetin and Kaempferol

Kale, like other leafy greens, is very high in antioxidants.

These include beta-carotene and vitamin C, as well as various flavonoids and polyphenols (2).

Antioxidants are substances that help counteract oxidative damage by free radicals in the body (3).

Oxidative damage is believed to be among the leading drivers of aging and many diseases, including cancer (4).

But many substances that happen to be antioxidants also have other important functions.

This includes the flavonoids quercetin and kaempferol, which are found in relatively large amounts in kale (5).

These substances have been studied thoroughly in test tubes and animals.

They have powerful heart-protective, blood pressure-lowering, anti-inflammatory, anti-viral, anti-depressant and anti-cancer effects, to name a few (6, 7, 8).

SUMMARYMany powerful antioxidants are found in kale, including quercetin and kaempferol, which have numerous beneficial effects on health.

3. It Is an Excellent Source of Vitamin C

Vitamin C is an important water-soluble antioxidant that serves many vital functions in the body's cells.

For example, it is necessary for the synthesis of collagen, the most abundant structural protein in the body.

Kale is much higher in vitamin C than most other vegetables, containing about 4.5 times much as spinach (9).

The truth is, kale is actually one of the world's best sources of vitamin C. A cup of raw kale contains even more vitamin C than a whole orange (10).

SUMMARYKale is extremely high in vitamin C, an antioxidant that has many important roles in the body. A single cup of raw kale actually contains more vitamin C than an orange.

4. Kale Can Help Lower Cholesterol, Which May Reduce The Risk of Heart Disease

Cholesterol has many important functions in the body.

For instance, it is used to make bile acids, which is are substances that help the body digest fats.

The liver turns cholesterol into bile acids, which are then released into the digestive system whenever you eat a fatty meal.

When all the fat has been absorbed and the bile acids have served their purpose, they are reabsorbed into the bloodstream and used again.

Substances called bile acid sequestrants can bind bile acids in the digestive system and prevent them from being reabsorbed. This reduces the total amount of cholesterol in the body.

Kale actually contains bile acid sequestrants, which can lower cholesterol levels. This might lead to a reduced risk of heart disease over time (11).

One study found that drinking kale juice every day for 12 weeks increased HDL (the "good") cholesterol by 27% and lowered LDL levels by 10%, while also improving antioxidant status (12).

According to one study, steaming kale dramatically increases the bile acid binding effect. Steamed kale is actually 43% as potent as cholestyramine, a cholesterol-lowering drug that functions in a similar way (13).

5. Kale Is One of The World's Best Sources of Vitamin K

Vitamin K is an important nutrient.

It is absolutely critical for blood clotting, and does this by "activating" certain proteins and giving them the ability to bind calcium.

The well-known anticoagulant drug Warfarin actually works by blocking the function of this vitamin.

Kale is one of the world's best sources of vitamin K, with a single raw cup containing almost 7 times the recommended daily amount.

The form of vitamin K in kale is K1, which is different than vitamin K2. K2 is found in fermented soy foods and certain animal products. It helps prevent heart disease and osteoporosis (14).

SUMMARYVitamin K is an important nutrient that is involved in blood clotting. A single cup of kale contains 7 times the RDA for vitamin K.

6. There Are Numerous Cancer-Fighting Substances in Kale

Cancer is a terrible disease characterized by the uncontrolled growth of cells.

Kale is actually loaded with compounds that are believed to have protective effects against cancer.

One of these is sulforaphane, a substance that has been shown to help fight the formation of cancer at the molecular level (15, 16, 17, 18).

It also contains a indole-3-carbinol, another substance that is believed to help prevent cancer (19).

Studies have shown that cruciferous vegetables (including kale) may significantly lower the risk of several cancers, although the evidence in humans is mixed (20, 21).

SUMMARYKale contains substances that have been shown to help fight cancer in test-tube and animal studies, but the human evidence is mixed.

7. Kale Is Very High in Beta-Carotene

Kale is often claimed to be high in vitamin A, but this is not entirely accurate.

It is actually high in beta-carotene, an antioxidant that the body can turn into vitamin A (22).

For this reason, kale can be an effective way to increase your body's levels of this very important vitamin (23).

SUMMARYKale is very high in beta-carotene, an antioxidant that the body can turn into vitamin A.

8. Kale Is a Good Source of Minerals That Most People Don't Get Enough Of

Kale is high in minerals, some of which many people are deficient in.

It is a good plant-based source of calcium, a nutrient that is very important for bone health and plays a role in all sorts of cellular functions.

It is also a decent source of magnesium, an incredibly important mineral that most people don't get enough of. Eating plenty of magnesium may be protective against type 2 diabetes and heart disease (24).

Kale also contains quite a bit of potassium, a mineral that helps maintain electrical gradients in the body's cells. Adequate potassium intake has been linked to reduced blood pressure and a lower risk of heart disease (25).

One advantage that kale has over leafy greens like spinach is that it is low in oxalate, a substance found in some plants that can prevent minerals from being absorbed (26).

SUMMARYMany important minerals are found in kale, some of which are generally lacking in the modern diet. These include calcium, potassium and magnesium.

9. Kale Is High in Lutein and Zeaxanthin, Powerful Nutrients That Protect the Eyes

One of the most common consequences of aging is that eyesight gets worse.

Fortunately, there are several nutrients in the diet that can help prevent this from happening.

Two of the main ones are lutein and zeaxanthin, carotenoid antioxidants that are found in large amounts in kale and some other foods.

Many studies have shown that people who eat enough lutein and zeaxanthin have a much lower risk of macular degeneration and cataracts, two very common eye disorders (27, 28).

SUMMARYKale is high in lutein and zeaxanthin, nutrients that have been linked to a drastically reduced risk of macular degeneration and cataracts.

10. Kale Should Be Able to Help You Lose Weight

Kale has several properties that make it a weight loss friendly food.

It is very low in calories but still provides significant bulk that should help you feel full.

Kale also contains small amounts of protein and fiber. These are two of the most important nutrients when it comes to losing weight.

Although there is no study directly testing the effects of kale on weight loss, it makes sense that it could be a useful addition to a weight loss diet.

Fortunately, adding kale to your diet is relatively simple. You can simply add it to your salads or use it in recipes.

A popular snack is kale chips, where you drizzle some extra virgin olive oil or avocado oil on your kale, add some salt and then bake in it an oven until dry.

A lot of people also add kale to their smoothies in order to boost the nutritional value.

At the end of the day, kale is definitely one of the healthiest and most nutritious foods on the planet.

If you want to dramatically boost the amount of nutrients you take in, consider loading up on kale.